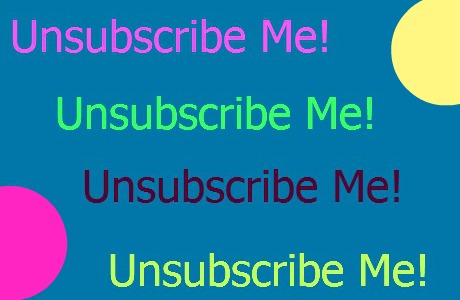 Unsubscribing ~ shouldn’t this be pretty easy?  Certainly not annoying?   But no, it seems unsubscribing isn’t “just click here” anymore.

For one thing advertising rates and other factors are determined by just how many subscribers a magazine, a blog, a newsletter, twitter or facebook page has acquired.  It isn’t quite as simple as that sounds, but it is a number calculated using the number of subscribers, the demographics of the subscribers and other factors.  If your subscribers go down, less people will see the advertisers’ ads and the ad revenue for the publication will also go down.

Here’s some ways a publication might keep it’s numbers up and maybe even get you as a subscriber.

Major magazines, for example, often offer a sweepstakes or giveaway to entice you to enter and when you enter – even though you aren’t fully aware it’s happening —- you are subscribed.   Normal sweepstakes can’t require you to purchase anything, and certainly this method is deceptive and should be a violation, but it continues to be employed by many major magazines.  Sometimes even if you do check you don’t want their publication, it doesn’t mean you won’t get it.  After all your name adds to their subscribers and that increases their revenue. The good news, if there is any, is that you can cancel your subscription, online or by mail.  You have to wait a few days and go online to unsubscribe, or wait for the bill. Once you have the bill, all you need to do it write “cancel” across it and send it back in.  Which leads to the other reason they employ this trick – so many people think they are “stuck” and cannot cancel (worrying about credit score, and such)- that those people wind up keeping  and paying for the subscription.

This specifically is aimed towards the political newsletters.  You know who you are.  I have unsubscribed at least 10 times and I still am getting your messages whether I want them or not.  Another offender in this list is the one that tells you that you will be off the list in 2 – 14 days – meaning by the time you see and realize we didn’t unsubscribe you – we will have also bombarded you with our message every day for 14 more days….and then you have to try to unsubscribe again.

By law, there needs to be a button that allows someone to unsubscribe from your email based newsletter and advertisements – commonly called spam.  To keep people on their list, they don’t let them see the button, don’t put a button or make it go “nowhere” once they push it.  When the unsubscribe link goes to a page with an error, it becomes a hassle and time consuming, so the recipient gives up.  There are many companies employing this tactic – but the worst one is a company that has made the “unsubscribe” information the same color as the background of their advertisement.  So technically it’s there, you just can’t see it.

All these ways are unacceptable, but fairly common practices.   My advice is if you want to unsubscribe, let the publication know that you do – by calling or sending an email.  If you cannot get anywhere let them know you are reporting the email as spam and will continue to do so until they stop sending it to you.  If even that isn’t working, block their URL so that you don’t get their mail at all.  Eventually I do believe the consumer should win this battle.