The first of our preparations are all centered around the motor home being “road ready”.  So we set about looking at all the systems to make sure they were in good working order.

First, we had the wheels all aligned, as the truck “felt” like it needed it when it got up to speed on a highway.  And those with “super trucks” like this one, already know that you need a real expert to do that well.  We thankfully had one within a short distance away – and took the truck there.  It did need it.  The alignment was adjusted, and while there we also paid extra to have the “steering wheel” re-aligned correctly.  That little additional aspect will help with knowing more about how the wheels are turned without getting out, or having someone else get out to look. To us it was important as first time owners.

Additionally, we are considering new tires even though the ones on the truck are in very good condition — the reason is that they are “worn” a bit funny from the alignment being off — and new tires would make the vehicle experience less drag and therefore better gas mileage.  The current tires would/could be sold to make up a good portion of the new price – and so at this point it’s a consideration, but not a necessity.

There was the small matter of a continuous beeping noise.  A sensor  was beeping and for a LONG time we couldn’t find out what it could be causing it to do that.  Out came the manuals and we had to read what it could be, run through them and start to rule things out.   Turned out it was the leveling system.  Some of the the stands under the rig needed to be welded and a few needed more serious re-threading work.  We could do this work ourselves (or should I say the “men” could do that themselves!) and so this was minor in costs.  We had to buy a tool or two to help with this but you know men love buying tools so that wasn’t a problem.

We found as we went from one system to another checking “everything” like it was an airplane getting ready for a flight, that our propane tank was empty.  And old.  That meant that we would have to have it “tested” and certified before they would fill it up with propane.  It’s a safety issue and we knew it had to be done.  However, we found out that we could replace the tank with a totally different configuration using 2 tanks and it was less expensive than testing and refueling the old tank.  It would also be easier to hook up to our tailgating grill, 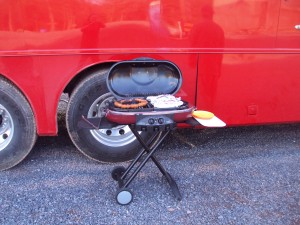 so we set about doing that.  We now have 2 new tanks and they are full of fuel for less than certification and fuel was for the old one.  Even better these are more or less removable and refillable at any propane location.  I am guessing that the old tank (from 2005) was the best way to do it at the time, but technology has advanced since then.

These were leaking — and we have had to reseal them.  Right now they are holding air, yay!

Phase 2 – Taking it out for a night or two coming up.