These recipes are my own variation of a recipe that I have seen for a Tuscany Style Soup.  So far I have made this soup twice (and will post both versions) and each time I adjusted ingredients and things based on what I had on hand.  Both times it was well received by my family, but each soup was different in flavor, and texture and I’ll share their comments.

Ingredients:
4 Slices of Bacon, cut into small pieces –  I used a kitchen scissor to cut the bacon, and I cut all 4 slices at one time — and for me that was much easier than trying to dice it with a knife.
1 lb. of hot Italian Sausage – I used the ground package for this soup
1 large yellow onion, diced
6 cloves of garlic, minced
6 cups of chicken broth or stock
4 cups of Russet Potatoes Cubed
salt, pepper to taste
1 cup of heavy cream
Parmesan cheese, grated for garnish

In a large soup pot cook bacon until crispy, then add the sausage and break it apart as it cooks.  Once the sausage is browned and crumbled, drain off the majority of the grease, leaving just a little (tablespoon or two) to use to saute the onion.  Push the sausage/bacon mixture to the edges of the pot and leave a space in the center to add and saute the onion until it is translucent – then add the garlic and saute it till fragrant.  This does make a wonderful smell and everyone in the family came to see what I was making.

Once you are done with that you will want to add the broth and potatoes and season with some salt and pepper (about 3/4 tsp. salt and 1/4 of pepper – you can always add more later).  Simmer till your potatoes are done, this will take about 20 -40 minutes depending on the size of your diced potatoes.

When the potatoes are done, you can add the heavy cream – I added mine slowly and while stirring.  Bring the entire mixture to a simmer and simmer for another 10-20 minutes to mix the flavors.  Serve with a grated parmesan garnish.

Comments:  This soup was much more spicy and liquid than the Version 2 will be.  As such it was a totally different taste/texture experience than Version 2.  Hubby liked this one more because of the spicy-ness, one of my sons said this version was a thinner soup (than version 2) with sausage and potatoes although he did like the flavor. 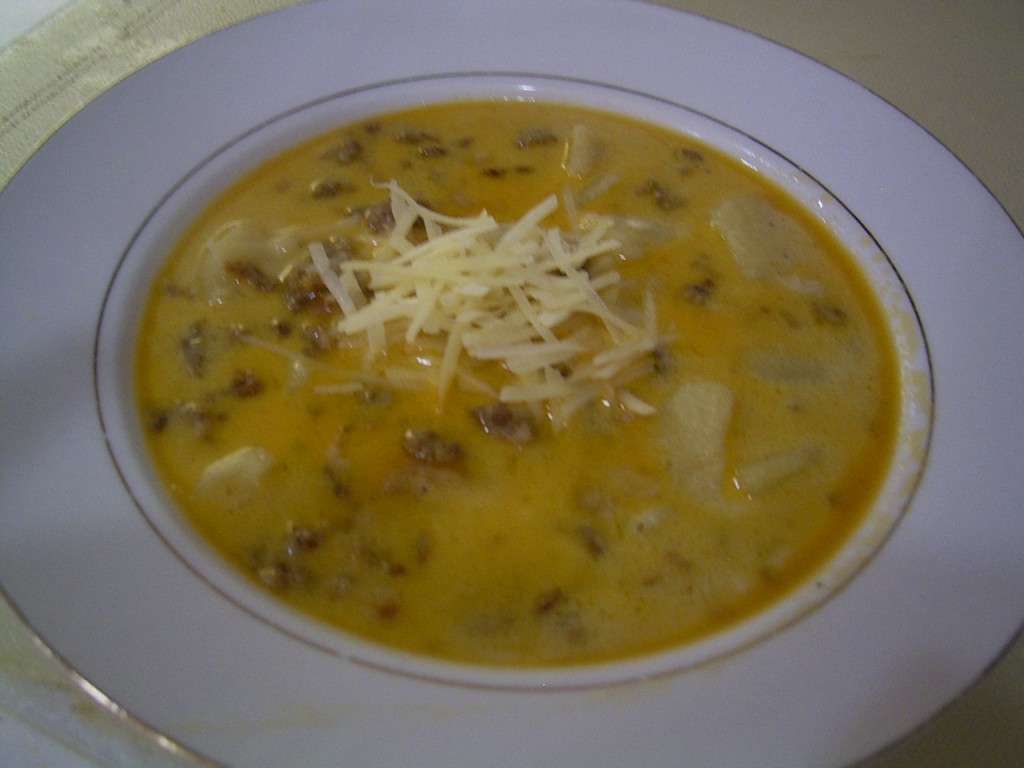