I just recently read of something pretty annoying to me.  It’s about a “blog contest” which has put the blog owner in a sort of a quandary.  She ran the contest per the sponsors’ instructions, and at the end picked a random winner.  The winners’ entries were verified (the entrant completed the mandatory and optional choices to receive her entries legitimately).  She notified the winner, and then notified the sponsor who (in almost all cases) is responsible for the prize fulfillment. 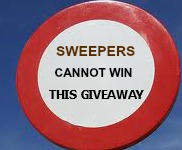 However that’s when the issue occurred.  The sponsor told the blog owner that they would not be awarding the prize to this winner because she was a “sweeper” and “she had won previously”, and that the blog owner should pick another winner.  Does being a sweeper disqualify you from winning?  Does winning one or more of their giveaways disqualify you from ever winning again?  How does one get labeled a sweeper?  Does winning separate contests from the same sponsor mean they will disqualify you – at whim, or randomly, for no good reason?  As far as I can know, this person entered in good faith – where she might have tweeted, or pinned, or shared on  Facebook, or maybe signed up for a newsletter, etc. just as all the other entrants had done.  And even if she has done this on every single promotion this sponsor has run, and has won previously, what makes this person now ineligible to win?

The blog owner didn’t want to pick a new winner.   She had already notified the legitimate winner.  There was no discussion about letting the sponsor know who won in advance of notifying the winner, there was no discussion, language or rule known to the blog owner or entrant, that allowed the sponsor to make this “arbitrary” decision.  The blog owner feels as if she is now in a precarious position because the alleged “sweeper” did all that was required of her, and was picked randomly and fairly.

The issue is – Can the sponsor disqualify a winner for this reason if it was not stated upfront to both the blog owner and the entrants?  Can they just keep having random winners picked till they “agree”  on a  person who is OK to win the prize?  Can you pick your friend, sister-in-law or aunt if they happened to enter and you wanted them to have the prize?  Can and do sponsors of blog contests make lists of people they will NOT allow to win in their contests?

How do you feel about this way of doing business – this fixing of the contest, this outright manipulation of the results?  We’d all be naive if we thought blog owners, or sponsors never did some of this.  I’ll bet they do it daily in one way or another (like just never sending the prize out to the winner).  I feel that no matter whom you are, why you entered, how many times you entered – if you entered legitimately – and were chosen randomly – you deserve the prize.

If this promotion clearly had stated that you cannot win a second time from this company, or that once you won from them, you were never able to win again from this sponsor, I might think differently.  But I believe that it’s really sneaky that the sponsor doesn’t mention that they will chose the winner in a fashion that might not be fair, and  have the right to determine who you are, label you and then disqualify you at whim.

I am not a lawyer, and I don’t work for the FTC (who might be the one who regulates things like this), so I don’t really know what to say.  As a blog owner the lack of ethical behavior on the part of the sponsor, and their lack of honesty really appalls me.  Actually it makes me a bit angry – because they really are treating the winner as a cheater who shouldn’t win because they’ve already awarded her a prize in a previous giveaway.  This entrant spread their message and basically did marketing for them by tweeting, sharing and entering, just like every other entrant hoping to win.  Nowhere did they give her any indication she was doing all that work for THEM for nothing as they had no intention of awarding her the prize.

I don’t personally know this blog owner, I haven’t ever to my knowledge hosted a giveaway by this sponsor and I am not the winner in this instance.  I have no investment in the outcome of this particular case but  I wrote this article because it’s annoying to me to know that even when you think people are running legitimate contests (and most are), behind the scenes sponsors are manipulating the outcome.

**No one paid or influenced me in any way to write this article, the contents are 100% my own opinions about an injustice that had come to my attention regarding a specific blog contest sponsor.

UPDATE:  The sponsor in question has decided to award the prize to the “sweeper” who actually won!  This is good news although the sponsor said they have rules on their actual site that say they have the FINAL say in these matters and that they can make this type of decision.  I believe if they want this type of rule,  just make sure everyone knows it, and sees it before they enter.  And remember.. with them saying they have the final say ~ that  could mean just about anything.  I can tell you, they are certainly not going to get any blog entries from me – I have better things to do with my time.

8 thoughts on “Sweepers – Have you been labeled and disqualified?”