Earlier today while reading the news – this item caught my eye. I wonder today where common sense comes in when dealing with issues such as this.

Sixty-four (64) High School Students were suspended for the day because they rode bikes to school! Ok, they called it a senior prank, but wasn’t it harmless? Would the principal rather they did something bolder, irrational, or down right scary? If you read the story (and the link to the original article is below) they had the mayor, a police escort and even parents lining the streets and cheering them on. But then the principal had to have the last word and suspended all of them…..why? In fact, if she would have known about it in advance (and we sure don’t know if she did from the article), I think she should have rode with them to show her support to the graduating class. Where has all the fun parts of life  gone? 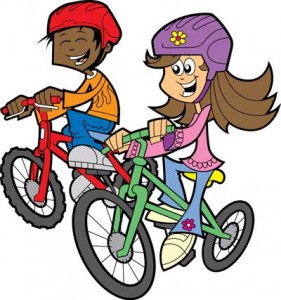 So again here is another story that gets you thinking — what’s missing from this story? In my opinion, this is a fun way to do something that marks your senior year, something you can remember at subsequent reunions, tell your kids, and hurts no-one. Can’t you see them borrowing their sisters, cousins or neighbors bikes to ride so they can all participate — I’ll bet the parents were very supportive of this — we know the police and mayor were.  So, in my opinion ~ what I think happened is that the principal said, if you can pull this off, and all ride bikes to school, I’ll give every one of you the day off. The only way I can do that officially is to call a suspension day, but teens the day will be yours! Enjoy it and stay safe.

All opinions are mine, including the made up portions and new ending to this story.  I just can’t help myself from doing this, otherwise it just doesn’t make sense!
Credit for the original report to Kyle Olson, EAGnews.org.  Original story here:  http://eagnews.org/students-suspended-for-riding-bikes-to-school/

Does riding bikes to school deserve suspension? I think not! its-annoying.com/riding-bikes-t… @Its_Annoying

I am going to start a new column where I comment or give you my opinion on things that are actually in the news.   The local, national or the world news is all fair game.  The subjects will run the gambit from just plain mundane to the weird and unusual.   Most of them will make both of us wonder where this world is headed.

Remember these will all be my personal opinions – I have no inside data, or sometimes even a solid reason for having these particular opinions.  These will all be based on what I read in the news — and quite honestly we all know that from one paper to the next the stories are slanted to the left or the right of center.

Starting off  I also want to say that sometimes the news just doesn’t add up.  Take the Trayvon Martin case as an example.  They spell his name different in several different accounts – aren’t newspapers supposed to check that before they publish?  News agencies and even some of the more involved parties have already said they lied, hid data, twisted the information a bit, and did other things that compromised the real story for the sake of sensationalism.

In this particular case, his death is a tragedy.  I am sorry it happened. I wish it could have been avoided.  However, being a gun owner, and having been trained and schooled in its appropriate and inappropriate use, I do not for one minute believe that George Zimmerman is guilty of second degree murder.  I think the officers and original decision to let him use the Florida Stand Your Ground defense was the correct and adequate decision.  Why? Because I cannot believe that he would have ever shot Trayvon if there hadn’t been a darn good reason to do so.  No person trained to use a firearm and who understands the protocol of appropriate use, would do that.  It’s a last resort choice, not a first resort.

Here in Virginia, we were trained that no matter whom we shoot for whatever reason, we will be charged with second degree murder until all the facts are weighed.  We were told to expect to pay $250,000 in lawyer fees to defend yourself against a rightful shooting.  George is from Virginia – and I am sure he didn’t just pick up a gun one day at a gun show and not learn why, how and when it would be appropriate to use it.

Maybe I am naive in this thinking, maybe there are people out there just waiting for a reason to shoot and to kill a teenager?  But I’d like to think I’m not.  In closing, I like to say a word to Trayvon’s mother and father – making this a media circus and trying to make money off of your son’s death is disgraceful.

What’s your take on the news? Travon or Trayvon Martin? George Zimmerman? Mine: its-annoying.com/category/in-th… #news