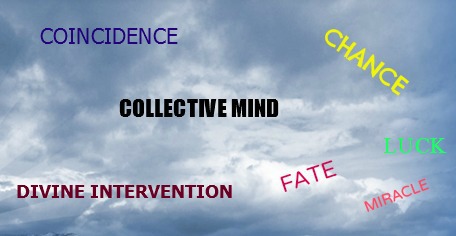 I have heard so much talk recently on TV shows and in books I read regarding coincidences.  Usually their view is that there aren’t any ~ and then the characters of these shows or novels use that information in a positive way to solve the crime, issue or problem that is part of the story.

But, I still don’t understand why they keep saying there are no coincidences.  I actually experienced an unexplainable coincidence yesterday.

Background – I have a cell phone for emergencies, and I don’t even give out my number.  I never know where the phone is (usually) and so I never answer it if someone calls me. When I do have it and need to use it, I am lucky if it’s charged.  You get the idea, this phone is not the center of my life and I prefer to go about my day without the interruptions it can cause.

Yesterday at exactly the same time – 1:00 PM both my husband and I happened to text my son about his computer.  Not only hadn’t we spoken about doing it, or even about the computer, we were in totally different places unaware what the other was doing.  For me, it was an amazing coincidence because I had to think about doing it, find my phone, check the battery power, lookup my son’s number and then text.  That takes time for me and some effort.  Yet both phones show each text gone out at exactly 1:00 PM.  Next and maybe a bit stranger, was the fact that my son happened to be on break at work at the exact time of the texts, and was surprised to get texts from both of his parents about his computer at the same time.

And if you are to believe the “no coincidences” theory, what does that mean? Are the events of our lives really objective or subjective?  Is there a collective mind, or consciousness that we can tap into?  Did we somehow know he’d be on break; did we know he needed to know about his computer; did we both sense the same thing and react at the exact same time?

In the last few years things like this been happening to both my own family and others that I know.  More and more it seems to point to the fact that there is a collective consciousness where we can tap into others thought patterns, emotions and actions.   Sometimes, I do really just know something is going to happen, in advance.  So, I started telling others what I felt before it happened.  I’d tell them what was going to happen and when (like within the next 10, 20 or 30 minutes this will happen).  I am sure they were skeptical at first but when it just kept coming true I knew I had validated those feelings as being accurate (since I now had credible witnesses to back it up).

Once I even predicted a house was going to blow up — and I didn’t do it by saying that house is going to blow up — that’s not how I “felt” it.  We were driving through an old neighborhood and I said if I had that house next to mine (think salmon color, like pink flamingo’s) I think I might have to blow it up.  I was joking of course.  That very night a house blew up!  It wasn’t the ugly house, but the nicer house I was referring to when I said “if I lived there”…. right next door to the ugly house … but it blew totally and completely.   Luckily the family that actually lived there was not home!   I didn’t even know about this incident till about a week later in the local newspaper, and I seriously had a hard time believing it.  I made my husband drive by there again to check it out, and sure enough it was the exact house.

Another time, when we were looking to buy a house, we found one my eldest son and husband loved.  But as we stood outside the front of the house, I said — we cannot buy this house as it is covered in blood, don’t you see it? (Of course they didn’t)  It turned out the home inspection showed at least 3 different issues that would/could kill someone who lived there and he urged us to take immediate action and notify the homesellers as they were in actual and current danger from electrical fire, gas leak explosion and carbon-monoxide poisoning.  We gave them our $450.00 home inspection report at no charge to try and save them from any one of those things actually happening to them…and we didn’t buy the house!

Many scientists have reported that coincidence “incidents” are more pronounced and more visible in people who have a strong emotional bond such as identical twins.  That bond allows them to build an increased capacity to deeply understand each other’s thinking and be able to predict and react to the other without the other being present.  But what is it that makes two people do the same thing at exactly the same time, or gives someone the knowledge in advance of an event that hasn’t yet happened?  Why did we drive down that street that day, or look at that particular house to buy? Just a coincidence or more?

It still amazes me to hear of these types of coincidences.  But, because I have experienced so many unexplained things myself and because I react to things based on strong immediate feelings that seem to be accurate, I am thinking there might be something to the collective mind theory ~ where information flows freely to those that have access to it.

By the way, my husband of 40 years now takes no chances.  You may think it’s hilarious, but if I even say “Why are we going down this street?”, he will immediately take another route.  I always ask him why, and he always says, I have lived with you for 40 years, if you are asking you know something and we aren’t taking any chances.

What do you think?  Want to hear more about my personal experiences with this?  Have any experiences you want to share?

11 thoughts on “Could it be a Coincidence?”