Congratulations to the Queen of England, Elizabeth II who is celebrating 60 years as the British Sovereign this year.  I do not know about you, but that’s a long time.

So many things have changed, been invented and put into common use since when her reign started.  Changes to the world itself, its climate, economic situation and even to the way the monarchy itself functions.

One of those inventions was computers, and to show that the monarchy can keep up with changing technology…. Did you know…?

In 1997 the British Monarchy established their own website: http://www.royal.gov.uk/theroyalresidences/buckinghampalace/buckinghampalace.aspx  from which I obtained many of these facts.

In July 2009 the Queen joined Twitter – though I believe that she has official tweet-iers (tweet – t- ears, my word) who do all the tweeting for her on a daily basis.  Congratulate or send good wishes via twitter to @BritishMonarchy

The Queen joined facebook in 2010 with the establishment of the page called The British Monarchy and for those who’d like to see it, it’s located here:  https://www.facebook.com/TheBritishMonarchy

And in just 3 more years – she will equal the reign of Queen Victoria who reigned 63 years. If she surpasses that milestone – it will make her the longest reigning British monarch.   I, for one, hope she makes that and many more! 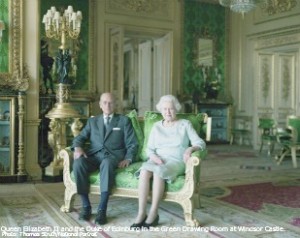 2 thoughts on “A Diamond Jubilee”