Wasting Money bothers me.  I am appalled when I see others doing it.  I am of the opinion that one can avoid this if they take the time and effort needed to search out an alternative.   But I am actually a bit angered by it when I see my taxes paying for ridiculous things.  Our government budget never seems to cut out any waste, they just seem to keep adding on crazy expenditures that are a waste of money.

And while I have a short list of a few of the wasteful  ways  below, I also think there are lots of valuable things our government does with their money —  I just can’t think of one right now.

Last time I checked the US Debt Clock,  we were over 15.7 trillion in debt.  Their continuously updating site shows debt of each citizen at $50,090.  So why don’t  we cut some of the waste!  My belief is that each representative wants as many dollars in his district/state as possible any way he can get them?  Let’s face it – it creates jobs, keeps the economy going and  the voters on his side….but ladies and gents, enough is enough!

These are some of the more ridiculous things our government wasted money on (in my opinion) in the past few years.

1) An Internet Dating Study – really?  Somehow they needed to know how Americans use the internet to find love.   I could have told them,  Americans aren’t searching  for actual “LOVE” , they use it for something else ….ahem.  This is where I think they should mind their own business and just butt out. Cost $250,000.

2) Super Bowl Commercial no one really understood.  The Census Bureau sponsored a Super Bowl Ad to the tune of $2.5 million that tanked because it was too ironic to actually be understood by most who watched it.  Duh?

3) Replacing 36 Toilets in Alaska’s Denali National Park – 1.49 million dollars.  They might have needed toilets, I know I’d like one in the if I had to go while at the National Park, but an outhouse with a roll o f TP would have filled my needs.

4) A pedestrian bridge 20 steps from an existing pedestrian bridge in Puget Sound $260,000.  And next year they may build another, after all there might be more pedestrians who want to cross.  I wonder who’s brother in law owns the company that builds those?

5) National Institute of Health spent $55,000 dollars to promote awareness of a vaccine that doesn’t exist.

7) They funded $120 million for federal retirement benefits to retirees — seems Ok on the surface, until you find out that those retirees are already dead.   AND one retirees’ son collected his father check for 37 years until he also died.   My fix… Spend 1 million to fund new employees to find these kind of system abusers and put the $119 million towards the debt.

8)How about the $3.4 million to create an underground turtle tunnel, or eco-passage, in Lake Jackson, Florida – Really!  Were they endangered turtles or regular ones?  This is money that could have been better spent feeding the hungry in America, but don’t get me started on that.

Is there never going to be an end to this.  I remember when they used to call it pork belly spending.  Spending by any name is spending.  And we need to rein in government spending  NOW!

All opinions in this post are 100% mine and have not been influenced by anyone.

Did you ever get the feeling you might be the only one who cares about honesty, integrity and ethics?  I do. I really believe and always have that there is nothing to replace those characteristics – in business and in my personal life.

As I read the newspapers, watch the TV news, or even scan the headlines online, I see more and more of these values being exchanged for money and power, and occasionally other things.    When did the money and power become the driving force in the universe, and why? Is it because with money and power you no longer have to deal honestly, show your integrity, or function ethically? 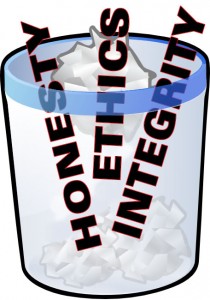 Our Congress and Senate leaders including those people who are running for offices in this country have to be running for a reason.  To get elected, they will spend millions of dollars (many times, millions of their own money), and lay out their life for all to examine for a job that pays $174,000 to $223,500 a year. There has got to be more to it.  Even if they possess the moral necessities as I see them, they are overpowered and out-voted by those who don’t.  They cannot vote their heart and conscience or push to enact the promises they made on the campaign trail, because they are heavily pressured by the lobbyists and special interest groups externally and other members internally.  Many, too many times, they compromise and I believe it is because they have no choice.  Any of us, who has never been in any of those positions, can’t speak to the actual “why” of this, but I have seen it happen over and over and over again!

END_OF_DOCUMENT_TOKEN_TO_BE_REPLACED

I don’t know about you, but there was something that “felt good” about having US Savings Bonds.  You were investing in the country you love, and the belief that without a doubt they were both responsible and able to pay you back with interest.  Holding the bond for a period of time you could double your investment.  They earned interest indefinately.

It was a standard gift to give for a new baby, because you knew that by the time they got around to cashing that bond, the interest would have accrued to a much more favorable number than your original investment.

It was a safe-haven against anything and everything that we imagined (at the time) could go wrong.  “At least I have those bonds”  ~ and that felt like a security blanket of sorts.

Well, that bubble started to burst a while back when the interest rate went close to 0% (current rate .60%). In the 1980’s bonds matured in 8-12 years, some had fixed rates of interest, some had market rates with a guarantee of a certain percentage of interest.  Todays bonds (since June 2003) take 20 years to mature to their face value, and only earn interest for 30 years.

All banks handled bonds.  No longer.  In fact as of December 31, 2011 they are all going electronic.  Existing bonds are not affected, and are still valid and able to earn interest for 30 years.  Banks will still cash your bonds for you, or even convert your paper bonds into electronic ones.  If you wish to buy bonds after December 31st, you will need to go to www.treasurydirect.gov

But for  me, it’s annoying.  I just do not feel the same about an electronic stake in this great country!  I can’t hold it, I can’t see it, and well, it just isn’t the same.

All opinions in these articles are mine and I have not been compensated in any way for these posts.

The first thing I want to say about these to be crystal clear — these aren’t about anything but revenue.  The revenue is for the owners of the camera and for the towns/states/municipalities that use them.  This revenue is no small amount; we are talking multiple millions per year.

If that wasn’t the case, the municipalities that use these cameras would care if there was an actual violation and who actually committed it. But they don’t, pure and simple.  They just want the vehicle owner to pay the fine. They just want the money.

Most times you will not win, if you try, as they assume guilt. Hey, they have the picture, right? And even if the camera is broken, you are still guilty.  And even if you were in Iraq or on the moon, your car was the one we have on camera and you are guilty.

In my opinion, and everything I write is my opinion, I think that stinks.  Why? Because I often let others use my personal and company vehicles. I often leave my keys in case someone needs to use my vehicle, or move it, etc. Sure I expect them to drive it gently, and to obey the law.  I believe most times they do.

There is a seemingly new interpretation regarding the red light cameras in many states.  I guess their revenues weren’t as high as they expected.  It seems now, that if your tire touches the white line – you are guilty of running a red light and they are sending tickets for same*. If your car stopped, but if your tire went over the white line you can and most likely will be found guilty of this violation at any traffic signal equipped with these cameras.  My advice then, based on that is run the damn light and get the ticket legitimately.  The hell with safety, and doing what’s right by trying to stop – if you are going to get the ticket anyway, and have to pay the fine, with little to no hope of contesting it and it’s “just that close” run the damn light.