Now that I am getting back to normal, and I have so much less on my plate to do for others (see Change is Inevitable), I have decided that I really need to start cooking again.  Lest you think that’s a joke, let me tell you, I have not cooked anything from scratch in a long time because of the heat, the power outages, or just plain exhaustion after working all day.

The heat and humidity around here has been unbearable most days – for the entire month of July.  That scenario drains all the energy from my old body and it makes me totally unmotivated to do anything.  And although I made sure I completed all the things I had to each day, anything and everything that could be – was put on hold.  And, I didn’t cook.

Yesterday, I decided I needed to start cooking again.  I had a pork roast thawed, so I decided to make a medium hot and spicy pork roast.  This is out of my normal comfort zone.  I could have made something I had made 100 times before with 100% success, but there was no fun in that.  I also decided I did not want to use the oven – and considered the crock pot, but decided on the dutch oven on the stove top, which was also a first for me!

First I gathered information on the internet on which spices I needed to use, and how to combine them.  I did this by reading recipes for spicy pork roasts.  I didn’t see any that involved all the ingredients below, but many contained some of them and they gave me the inspiration to “try” what I thought would work. My main influence was from a Filipino recipe I saw and the resulting “praises” from the people who had tried that recipe.

The picture is the ingredients I originally assembled, but as you can see I added more.

The first step for me was to make that spicy hot sauce.  I used my Cuisinart Chopper/Grinder and added the entire can of chipotle peppers, the 2 tablespoons oregano, all but 2 of the larger cloves of garlic, ¼ of the onion, ½ cup of water, ¼ cup of soy sauce, ½ tsp. of the crushed red pepper, ⅓ cup of sugar and 2 tablespoons of white vinegar.  I ground/chopped/combined it and then put it into a bowl and set it aside.

Next I put a little olive oil in my dutch oven over medium heat on the stove top and added the remaining garlic (which I had sliced thin) and all of the remaining onions.  I cooked them till the smell was amazing and the onions were just getting transparent.  It didn’t take long.  I put them in another bowl on my counter and proceeded to brown the pork roast on all 4 sides. 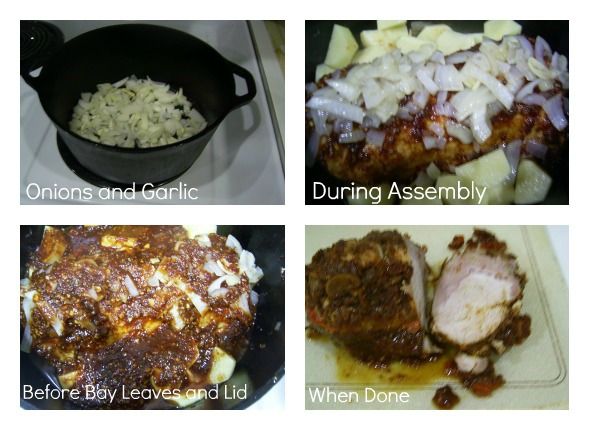 Just 1 hour later on low – it was done.  I immediately removed and discarded the bay leaves. I think if I make this again, and you can bet my family is already hoping for that – I’ll try checking it a little earlier because the internal temperature of the pork was a little higher when I checked it than I needed.  It was still delicious.  My son gave me the ultimate compliment when he said it was spicy and sweet when you ate it and then gave you a punch of heat. He said I should make this my “signature” hot sauce.  That sure makes me want to try it with some chicken or shrimp!

Cooking Again – Spicy Pork Roast – It was a hit with the family too!its-annoying.com/cooking-again-… via @Its_Annoying #recipe